The fallen was a good hearted child. He didn’t need to be taught to share, or help others. He defended the weaker kids, yet had respect from the stronger children. He was the son of an armor craftsmen that was well known for his ornate touch when making weapons of war. The Fallen often helped his father and was well on his way to carry on the family business.

He fell in love with a village girl whose father was one of the greatest hunters in the village. The village was full of hunters and was well known for bringing down some of the largest beasts in the land. No creature was too large for the brave hunters to try to add to the trophy hall.

One day, while the hunters were gone on a group hunt, the town was invaded. They came for destruction. The Fallen, in a panic, left his father’s workshop shop to protect his love, but it was too late. She was nowhere to be found. There were only rumors that the leader of the invaders, a man wearing a dragon tooth adorned mask, rode off with The Fallen’s beloved. 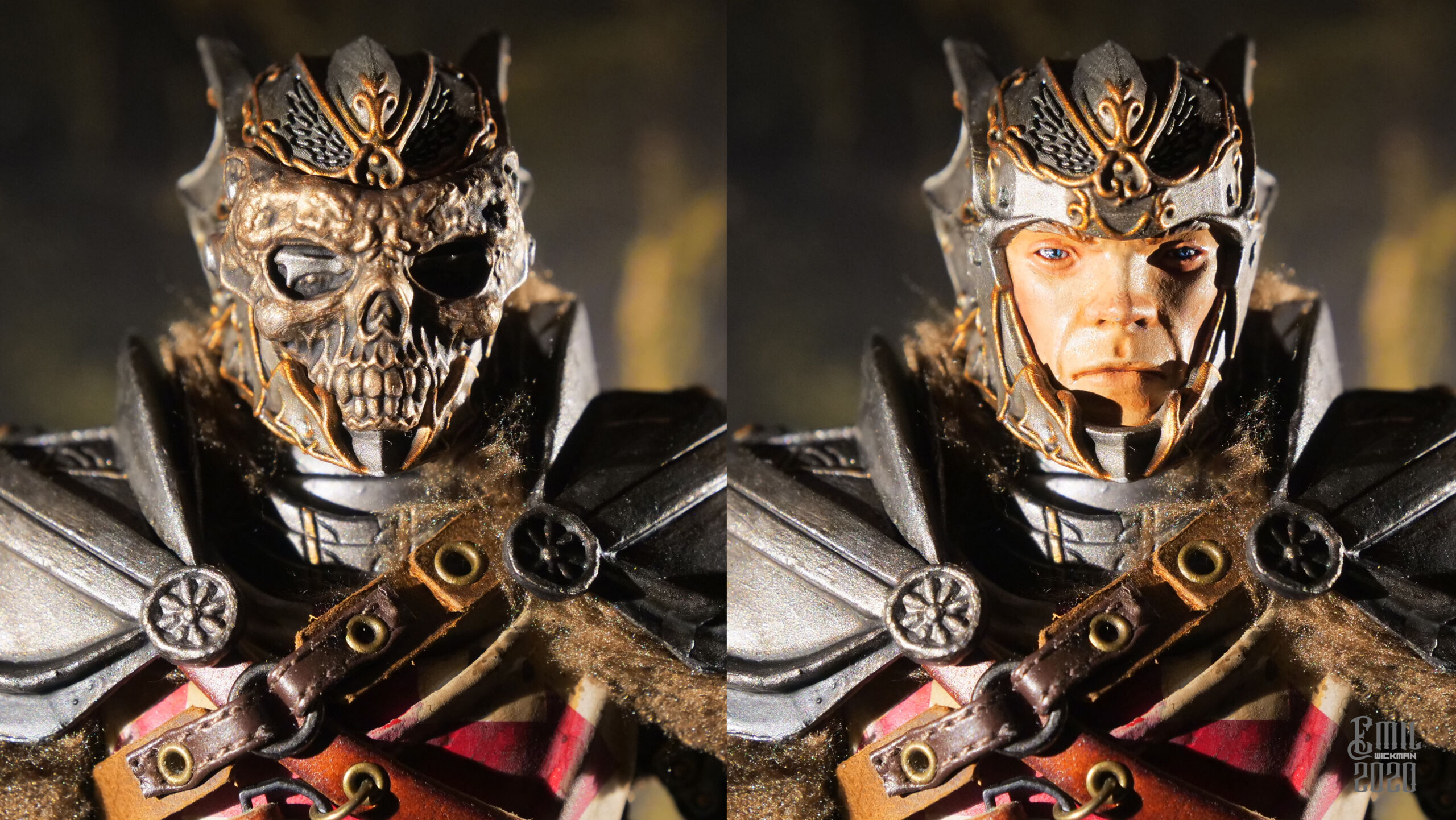 Learning how to fight was his new goal and he excelled at it. He would one day come face to face with the dragon man, and he had to win. He relished combat and craved bloodlust. He joined any battling army he could find, not caring about the cause or the enemy. He only wanted experience on the battlefield. He cared little if he died.

After years of fighting he returned home. Now a master warrior, but tired, empty, and a failure. He never found the dragon man or avenged his love. The Fallen slept for days. When he woke, he decided to return to the only life he knew. Remembering the skills he learned as a young man, he crafted himself a new face shield that more properly reflected the death mongering man he had become. A horrible looking skull that he hoped would someday be the last thing the Dragon Man would see. He was getting ready to leave when his father presented him with a gift. It was a beautifully crafted war helmet. It had an almost angelic look to it. It was the complete opposite of how he felt about himself, but he realized that his father still saw the kind hearted boy he once was. The Fallen wept because he knew he had followed the wrong path, the path of revenge. He promised to use his skills to only do good deeds, and wear his father’s helmet to let those in need that he was a friend.

However the Fallen also kept the skull faceplate he made for himself, and fitted it to attach to his father’s helmet. The Fallen wishes to play the role of the hero, but when his rage gets the best of him, he affixes the skull to his face, and then there are no lengths he will not go to vanquish his enemies.

After thinking he was done with revenge, The Fallen heard a rumor about group called Gods Fire that was hunting for a man with a dragon mask. He found the group, made friends with its leader and before long was riding alongside them. He is one of them, but make no mistake he has his own motivations that the rest of the group are completely unaware of.

During the darkest time in the Fallen’s life, when he was fighting in any battle he could find, he became quite wealthy from looting and pillaging. He became a prized ally for any army and began getting paid for his services. He began using the money to raise his own small army, and of course the price for his services began to increase exponentially. He and his army became famous and had a reputation for being able to turn the tide in any battle.

Once the Fallen decided to repent from his war mongering life and only use his talents for good, he purified his army by removing any members that did not share his new attitude. His army became smaller but still very effective.

When the Fallen decided to join the Believer, who was on the trail of the infamous Dragon Warrior, He left his army under the command of his most trusted soldier. Now the army still works under the Fallen’s financial backing, but without the Fallen’s day to day leadership.

From time to time, God’s Fire has had the need for reinforcements, and The fallen is always obliged to provide a small army to further the righteous cause. 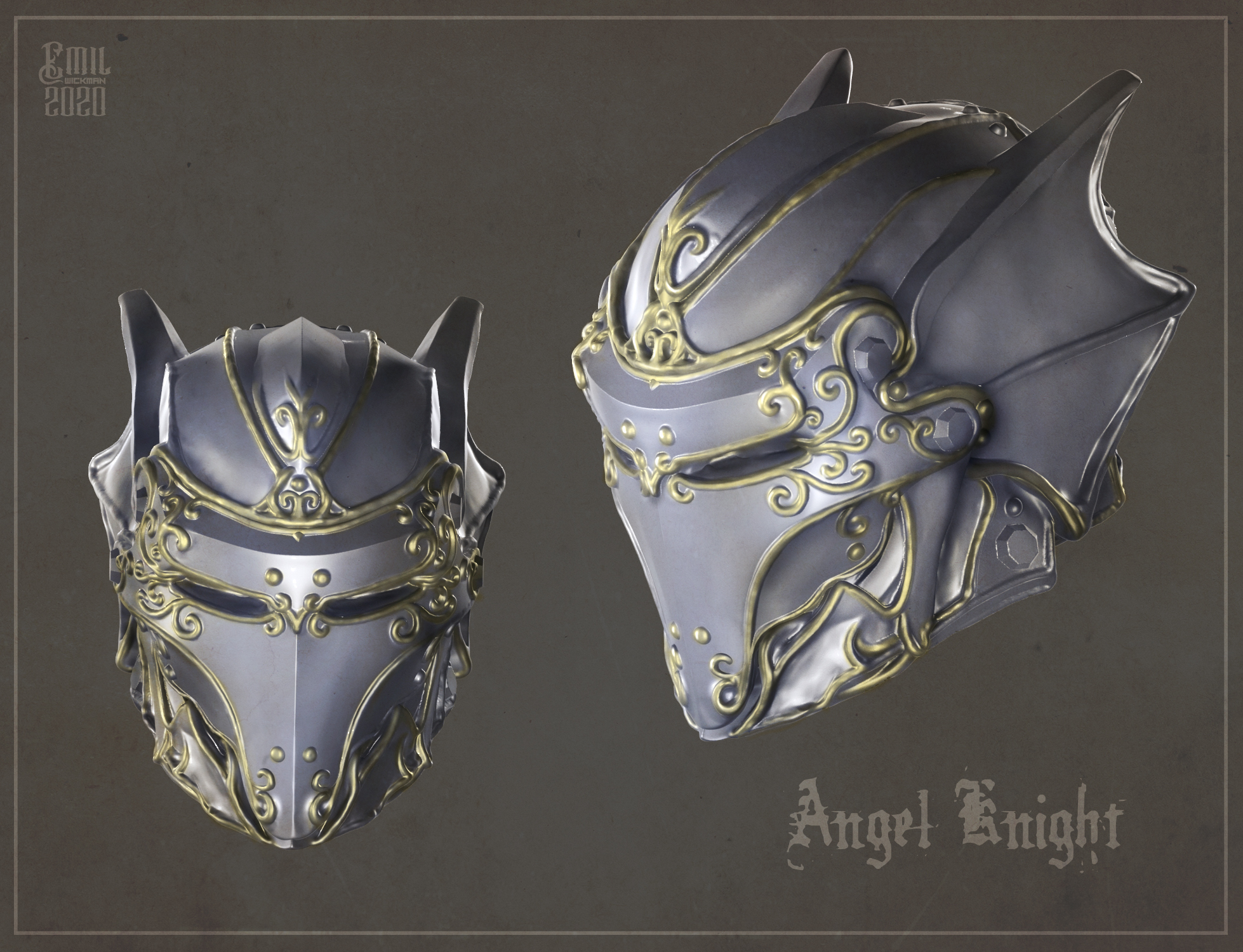